10 must see things at the British Museum 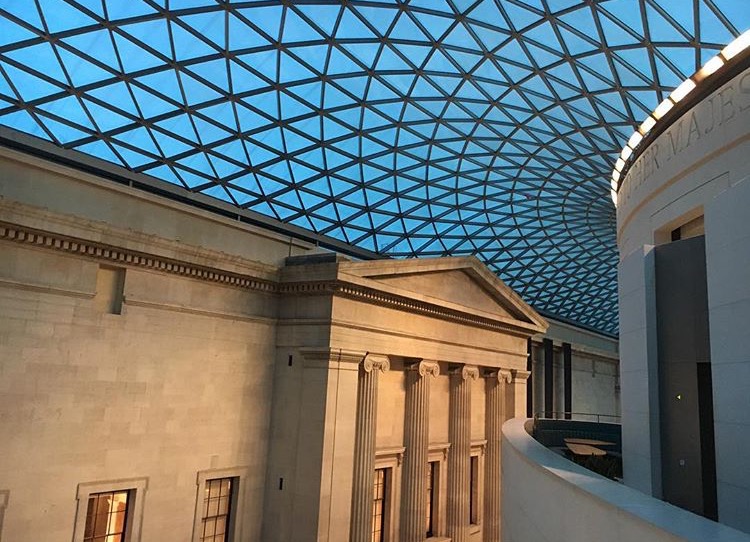 We LOVE the British Museum here at Four Thousand Weeks, and it’s such a staple in our recommendations for people to go to when they visit or even take dates. But its just so huge that we figured what better thing to do than take you round the museum to our 10 favourite things you need to see! (Photos and locations accurate as of February 2018 when we went on our date day). 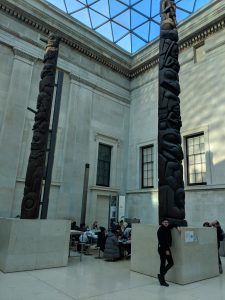 Our fascination with totem poles actually grew when we went to Cambridge for the day and saw some in their museum. The ones here in the BM are so great. At 12 meters high, from British Columbia and made of wood, these are no exception to how brilliantly fascinating they are. 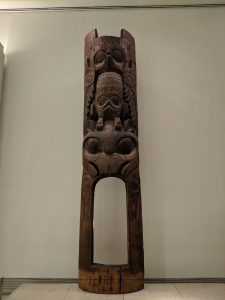 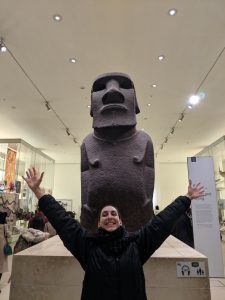 Or as we call him, Mr Easter Island. We think he’s in an odd place, but it’s so great being able to see a real life emoji in the museum! ???

He is an Ancestor figure ‘moai’, made of basalt, and was presented to Queen Victoria in 1869 and is 2.42 meters high. 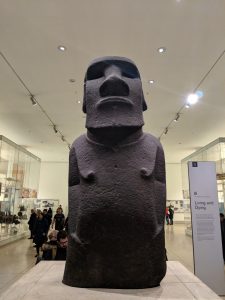 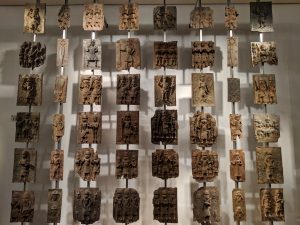 These hit our top 10 because they’re quite hidden and not many people know about  fascinating colonialist story. Made in the 16-17th Century, these brass plaques once sat proudly on the wall of the Oba (King) of Benin’s palace.  In 1897 the British “acquired” Benin, and as a show of power for people back home many precious objects were “seized”. The British Museum successfully petitioned the Government to safeguard some of these objects. In 1897 the Crown Agents for the Colonies on behalf of the Foreign Office agreed with the British Museum a temporary loan, and alongside the ones on display, it is known that today over nine hundred plaques are known to exist in museums and private collections around the world.

If this interests you at all, you should have a look at the wonderful spoken word poem that George the Poet did about the story of these plaques. 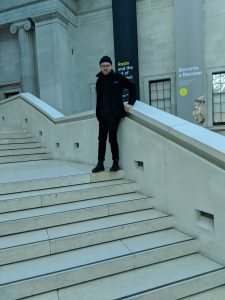 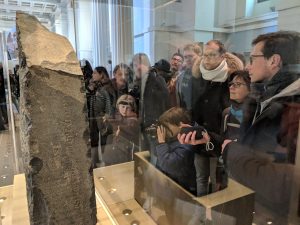 The Rosetta Stone is one of the most, if not the most, important documents of you can call it that, that has helped archaeologists and linguists crack the codes of hieroglyphics. A very large chunk of the original exists and I always pop to see it when I’m there like a mini pilgrimage of thanks.

Now if I were you, I’d pop and have a look at the Rosetta Stone and then head around to the Enlightenment Gallery where a replica exists that never has any queries or crowds, and you can touch and stare at up close. 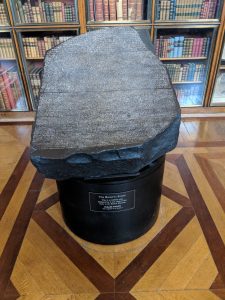 Whilst you’re in the Enlightenment Gallery, why not go complete Harry Potter, and find a couple of the hidden doors (clue: look for the fake books). Unfortunately they don’t lead anywhere as exciting as Narnia (yes I know the references don’t match), but they do lead to offices! 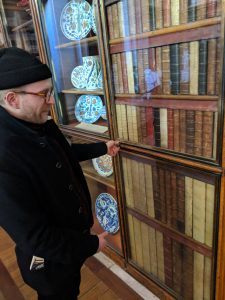 In the same room as the Rosetta Stone (the real one) are Tim’s favourite objects. The most giant sculptures that you’ll ever see in a museum, the guards told us they had to be on the ground floor as no other floor would be strong enough! Sphinx and busts of Pharaohs and all sorts. Check out the toes and parts of the sculptures that have been worn down by people touching them for luck or protection! 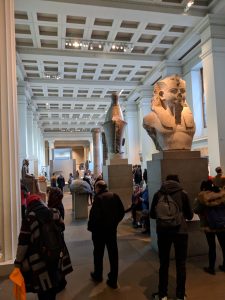 The Parthenon was built as a temple dedicated to the goddess Athena. It was the centrepiece of an ambitious building programme on the Acropolis of Athens. We were lucky to visit it this summer and there is no escaping the controversy of the location of the original friezes from the outside of the temple .The temple’s great size and lavish use of white marble was intended to show off the city’s power and wealth at the height of its empire. Which obviously when the British came in, they decided they had to have. Rather than steal them, they actually bought them but they paid a man working on the excavation and renovation of the Parthenon. Should they be here? Probably not. Is it worth seeing? Totally. 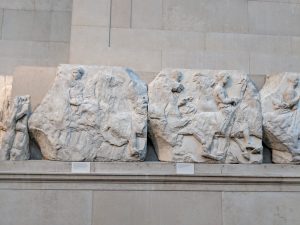 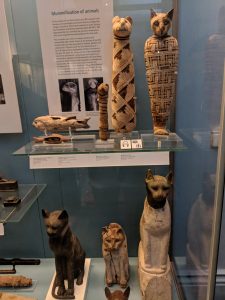 There are a large collection of dead things at the British Museum, particularly from Egypt. Death and the afterlife held particular significance and meaning for the ancient Egyptians. Complex funeral preparations and rites were thought to be needed to ensure the transition of the individual from earthly existence to immortality. The best bits for us though, the mummified animals, particularly the cats, hidden in a case in the corner of the room! 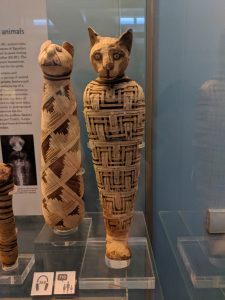 These coins are the equivalent of Starbucks store cards but from the 1600s. Coffee houses – in places like Russell Street, were the places to be seen. Places for gossip, coffee and geniuses, and the places of revolutionary chat, issued their own coinage which they and their clientele could trust. 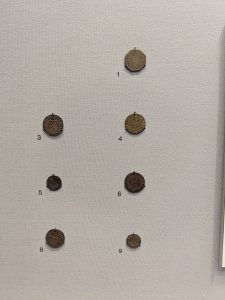 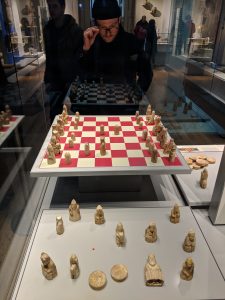 These chess pieces form a remarkable group of iconic objects within the world collection of the British Museum. They were probably made in Trondheim, Norway, about AD 1150-1200. The chess pieces testify to the strong cultural and political connections between the kingdoms of the British Isles and Scandinavia in the Middle Ages, and to the growing popularity within Europe of the game of chess, it is possible that they originally belonged to a merchant travelling from Norway to Ireland.

One of our favourite pieces as we think they provided the inspiration for the moving chess pieces in the Harry Potter films – and were one of our stops on our DIY Harry Potter walking tour! 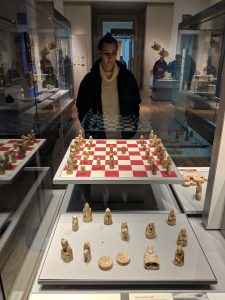 In the next room along, is the most beautiful golden mechanical ship. Made in the German region in the late 1500s, and purchased and gifted to the museum. It’s supposedly a clock, or has clock mechanisms, and used to play music and have lots of moving parts, including firing canons! 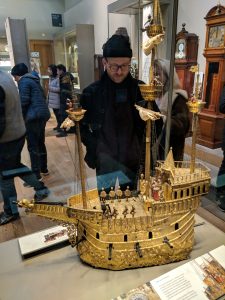 Ok, so we’ve already cheated by doing 2 in one, so here’s an additional one as a bonus:

We love this remains of a helmet found in 1939 in Mrs Pretty’s back garden. Part of a magnificent hoard, that was the first of its kind in England, and gave archaeologists their first real proof of how wealthy Anglo-Saxons lived and died. Thought to belong to the part Pagan, part Christian King Raedwald, its worth a look as it’s also with his shield and close to the other Saxon hoards found more recently! 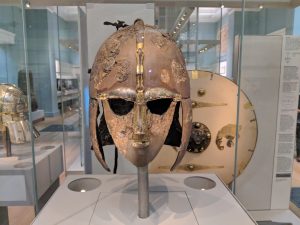 Let us know if you think there’s anything we’ve missed out from our top 10 in the comments below! 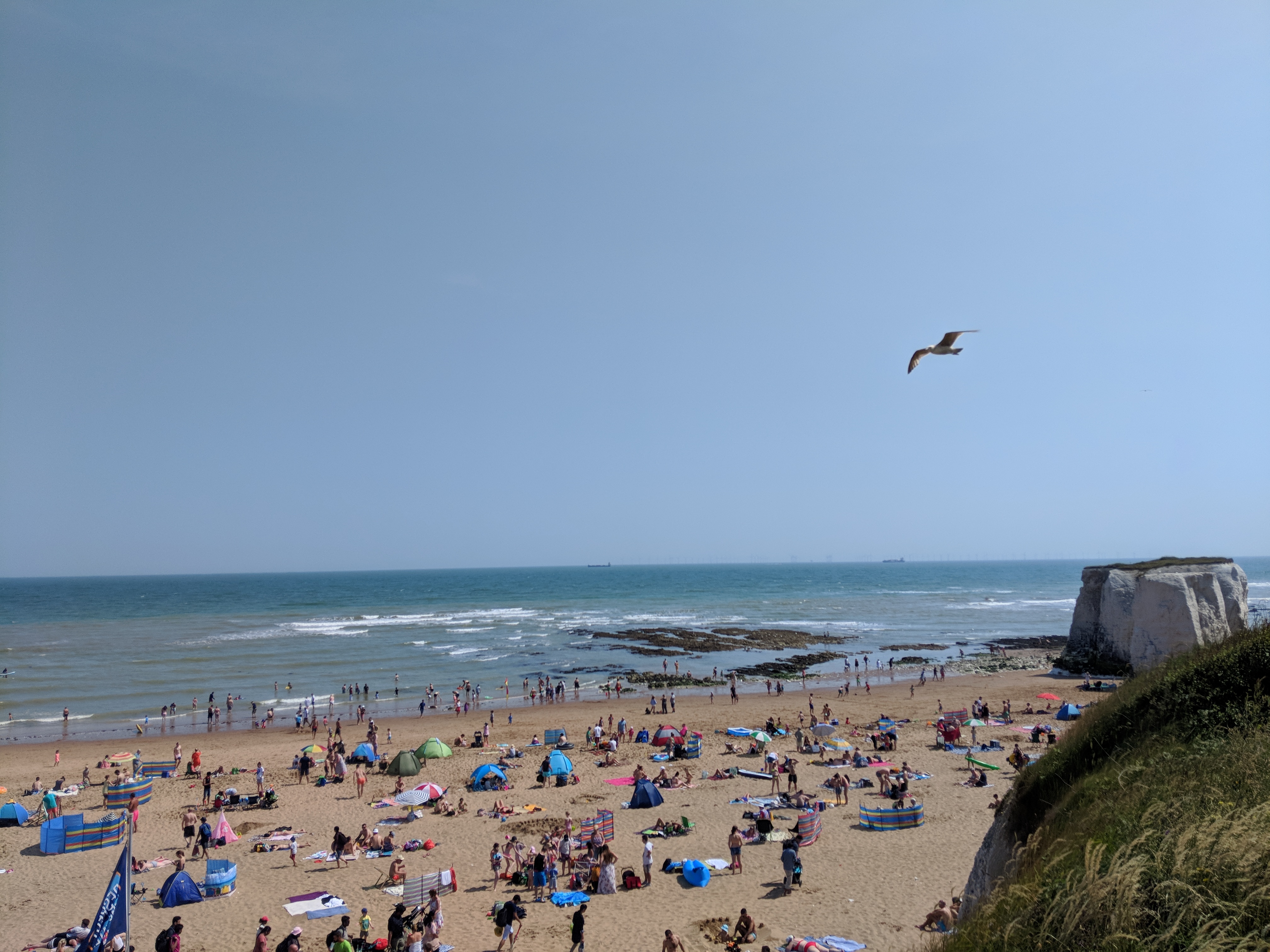 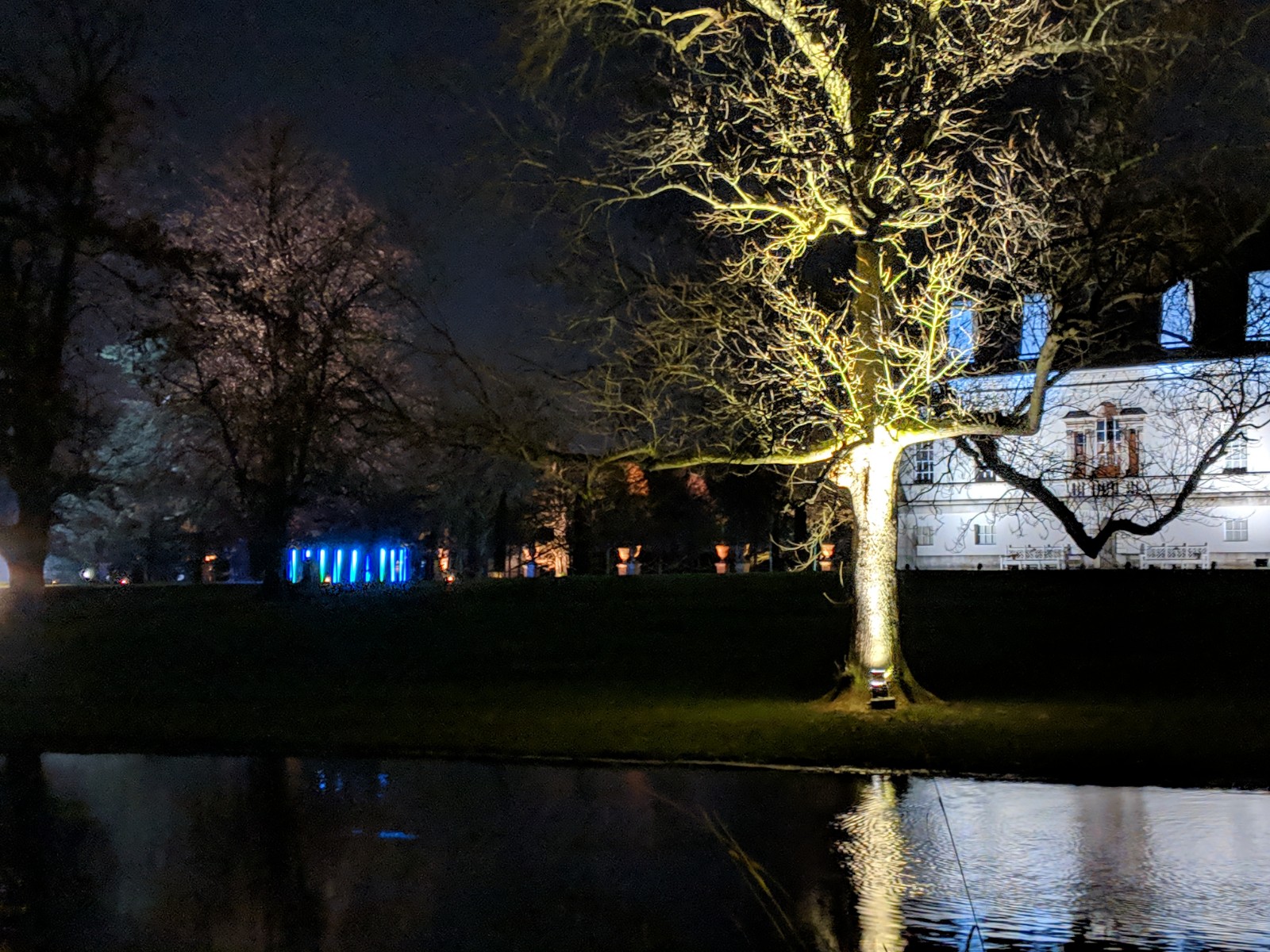 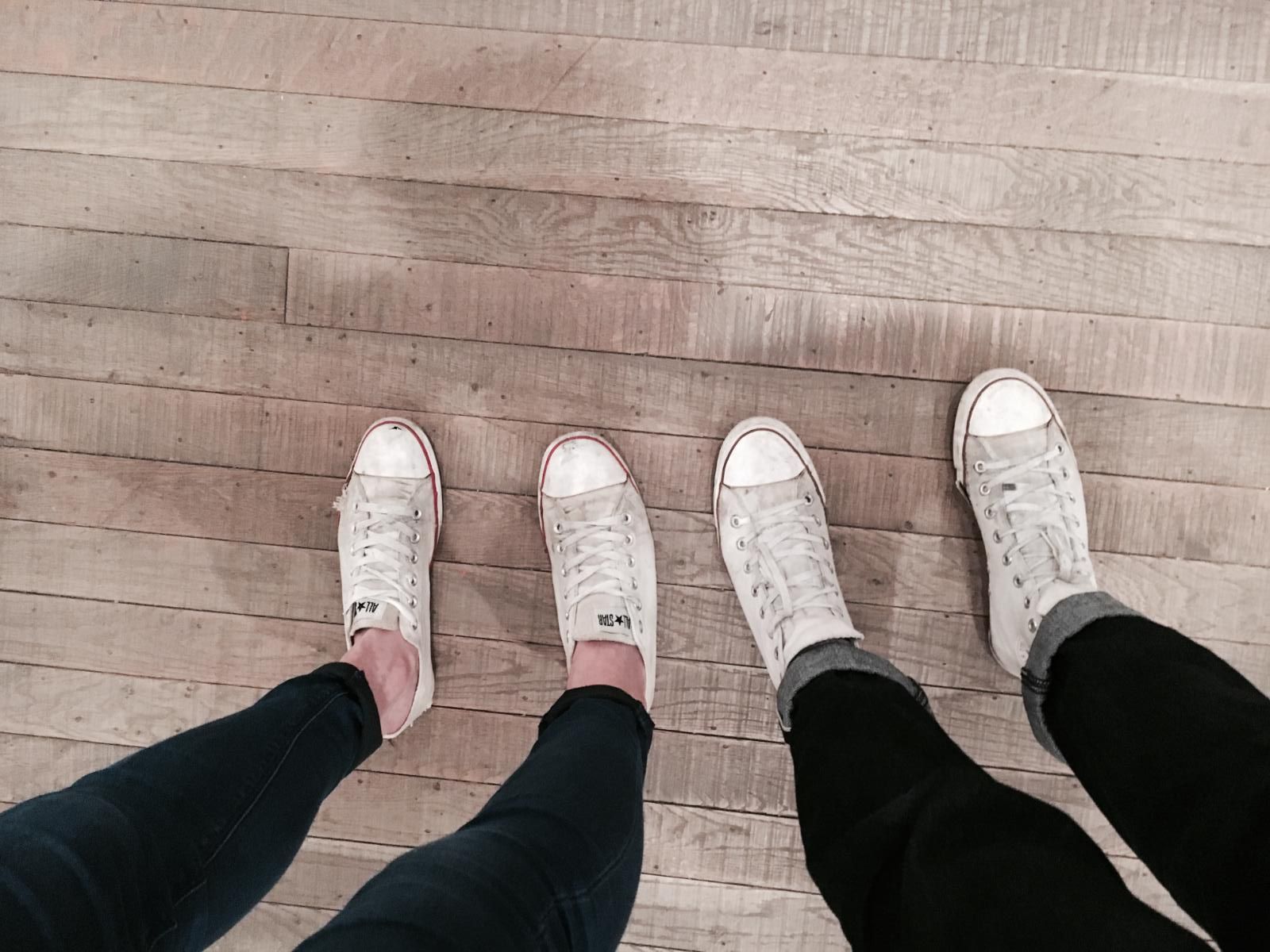