5 reasons to go to Croatia off season

One of us is a teacher, the other is a musician. That in itself causes travel conundrums unknown to our friends, but this October half term, armed with an old school friend, I seemingly followed in the rest of the millennials and journeyed the 2 and a bit hour plane ride to Croatia.
Obviously we weren’t going for the heat, and I’m hardly the type for a beach holiday, but the flight was half empty and the mega-clubs were closed which meant the binge drinkers and sports fans had also taken leave of the islands.
The holiday itself was amazing, 4 days away from the busy-ness and instantaneous-ness of london. Below find out what we did and our 5 reasons to go to Croatia out of the summer rush.

Considering it was practically November when we went (last week of October anyway), aside from the first day, the temperatures still hit the 20s each day with glorious sunshine. It made it excellent for finding little bays to sit and read in, to hike up into the mountains, to have a day on a speedboat and explore the Palkeni islands and Vis. 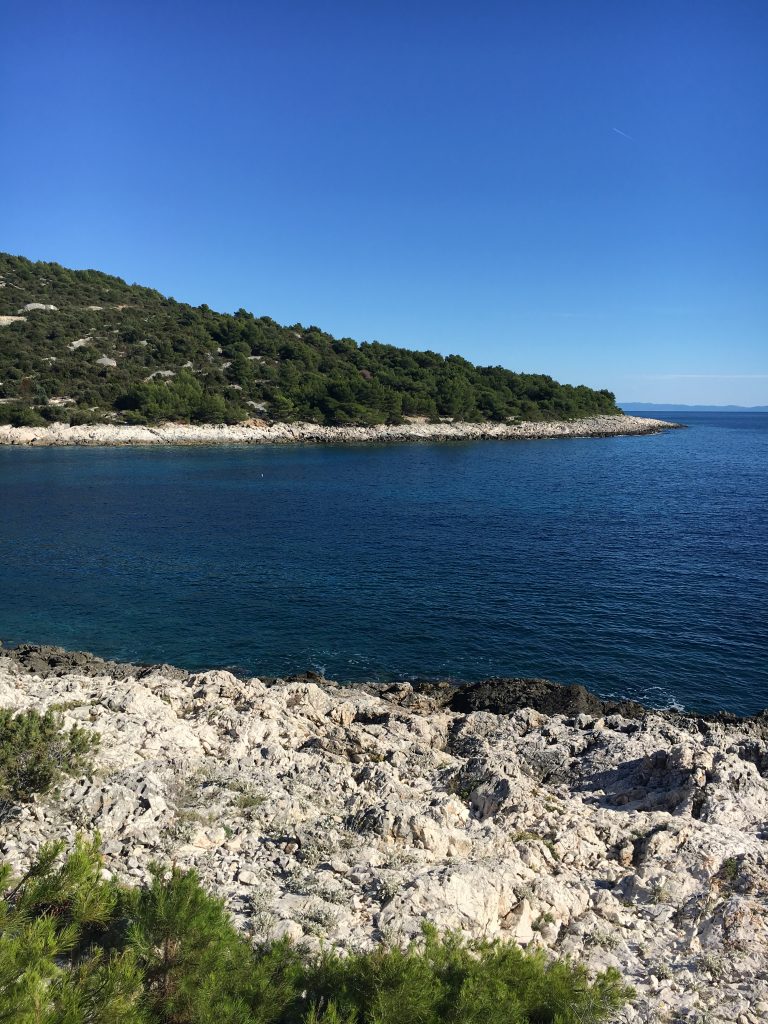 2. Everywhere is quiet.
When we arrived in Split at 10am with our hand luggage we could see lots of what Split had to offer in our morning there. We were shocked by how quiet it was and how we had moments where we were in places where there was not another soul. This was the same when we went to Hvar and walked up to the Fortress. We could explore the whole fortress at our own speed, with no one around to get in our way, and we could sit on the top of the fortress for an hour or so marvelling at the views and setting the world to right. That day we also wandered for almost an hour to find a beach in a bay not far from Hvar town, where the forest met the sea, and it was empty save for 3 other people! The ferry back to Split from Hvar was a joy, as well as our day on the boat, where we could get what we wanted and not have to share with tens of others. Most importantly, there were so few people around that we didn’t need to make reservations for dinner on Hvar at Dalmatino (you MUST eat there), and in Split at Portofino (again, really great food and good size portions, well priced). 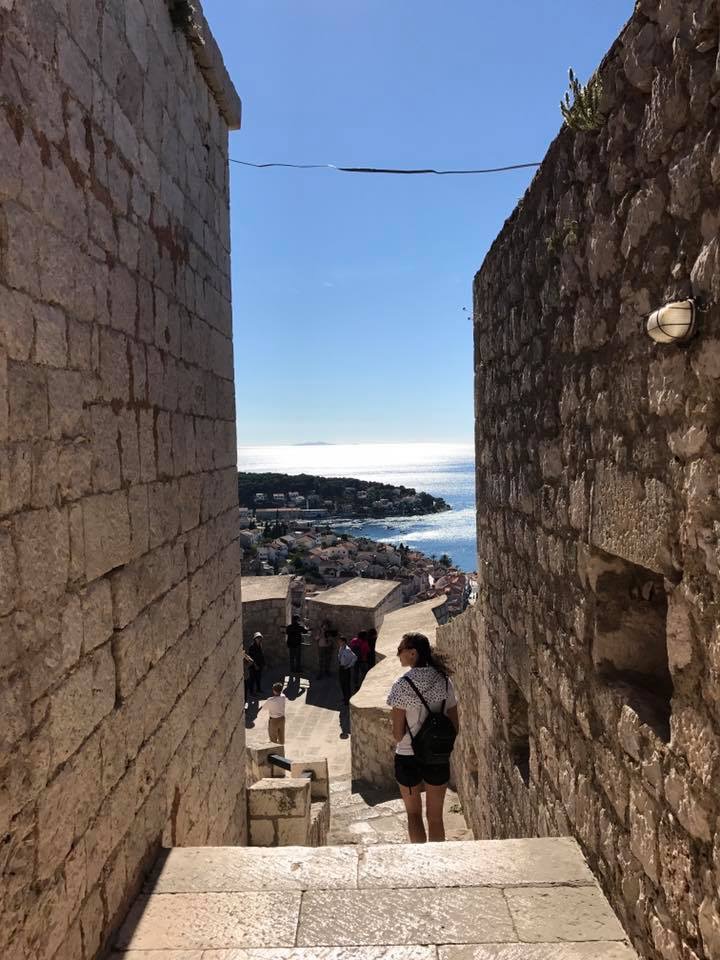 3. Everything is cheaper.
From the flights (return on EasyJet from London to Split averaging about £70 return) to the cost of hiring a boat (we went for one with a skipper, for about £50), because they have less tourists and less demand, the prices drop. For example in Hvar at this time of year there are only about 500 tourists on the whole island, not just in the main town! 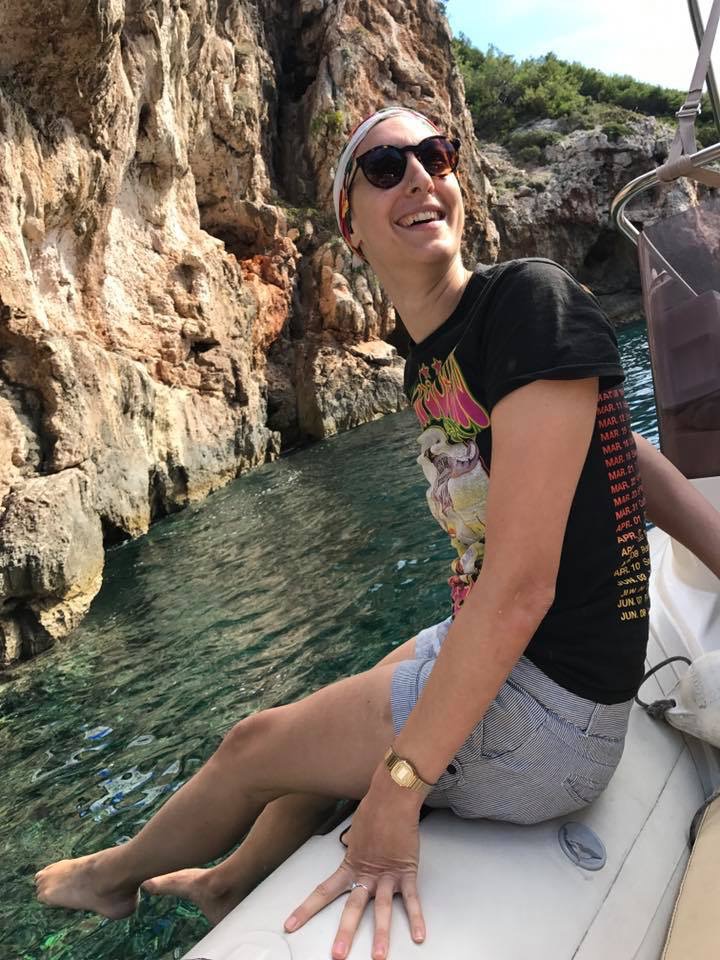 4. The locals are happier.
Speaking of the 500 tourists, there’s a reason the locals were much happier: in high season the population of Hvar rises from 4500 locals to 30,000 with revellers.
The locals being happier makes it much easier to get around and find things out. Our Airbnb host was so helpful on our arrival that she stopped to spend ages with us, and gave us a readily google translated history of Hvar that she had written herself! It’s the little things that make the difference, it would seem that most locals also don’t work or of high season…most spent nice days in their gardens or in coffee shops and were very happy we had come to Hvar not to rave in the evenings. 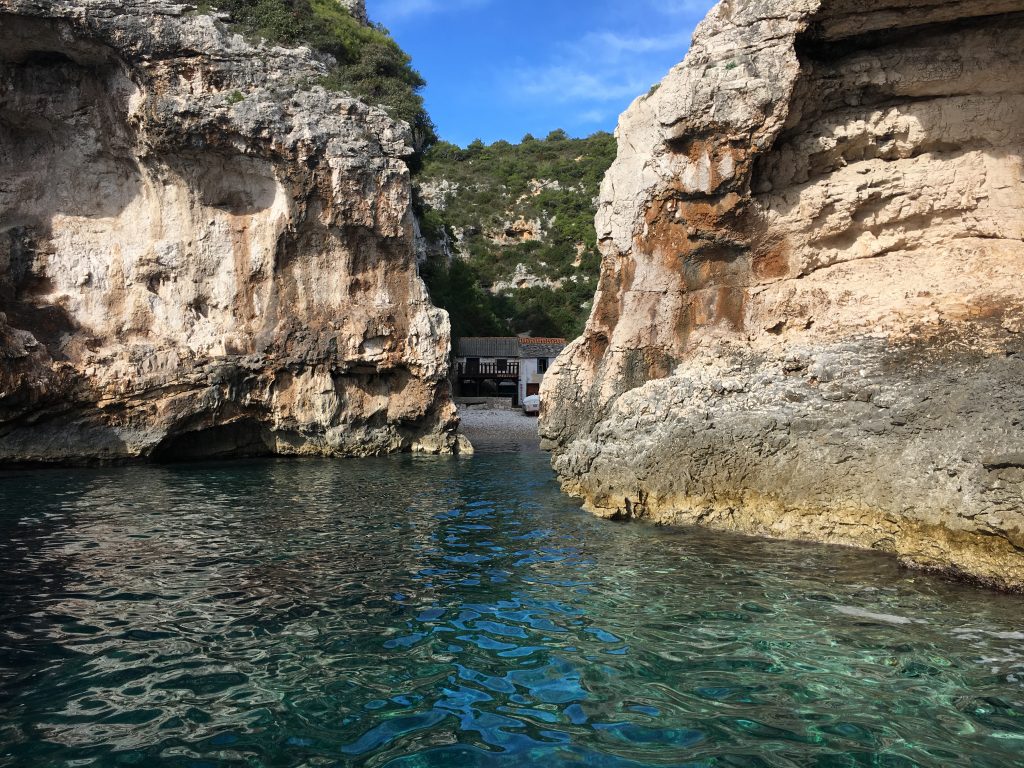 5. It’s more of an adventure.
We arrived into Split and decided we were going to head to Hvar for a getaway for the week, looking it up online we saw that the catamarans ran every 3-4 hours, cost about £3 and took 55 minutes… or they would have done if it wasn’t high winds and low season. So we decided to adventure on the 2 hour car ferry to the same island, but to a different port where the lady at the ticket office told us she was sure we could get a bus. We docked in Stari Grad without a clue where we were really but knowing where our Airbnb was (not worth the 4 hour walk the maps suggested), so we got on the first coach we saw and thought what’s the worst that can happen…turns out we ended up exactly where we needed to!
Not having hundreds of people around, the weather being cooler but still warm and not much being open, meant that we could go further away and higher up into the hills of Hvar to see the amazing sights and not be sweaty and exasperated at the end of it.
It was also more of an adventure because we had done our research of things to do and places to see as always, but not much was open as it was all shutting down after summer, so we had to hunt down and explore to find more!

Recommendations from what we did in short form:
Do get a guided tour around Split, but don’t spend too long there. It’s a lovely city but doesn’t have much except for the palace (where they filmed the Meereen scenes for GoT), and things are not the easiest to work out if you want to know lots about the history – a tour guide would have been much easier for us!
Do spend enough time on Split that you can do an organised tour or get a car yourself to go to the national park: Krka. The beauty of the green and the waterfalls is something not to miss.
Do go out to the Islands. Hvar comes heavily recommended, Vis is perfect if you want to totally escape (there’s NOTHING) on it, otherwise Brac (and Bol beach) were highly recommended. Closest to Split too.
Do hire your own boat, or if you’re not feeling confident enough get a skippered boat out to the Palkeni Islands because they are so beautiful and peaceful and just so fabulous.
Don’t miss the sunsets. 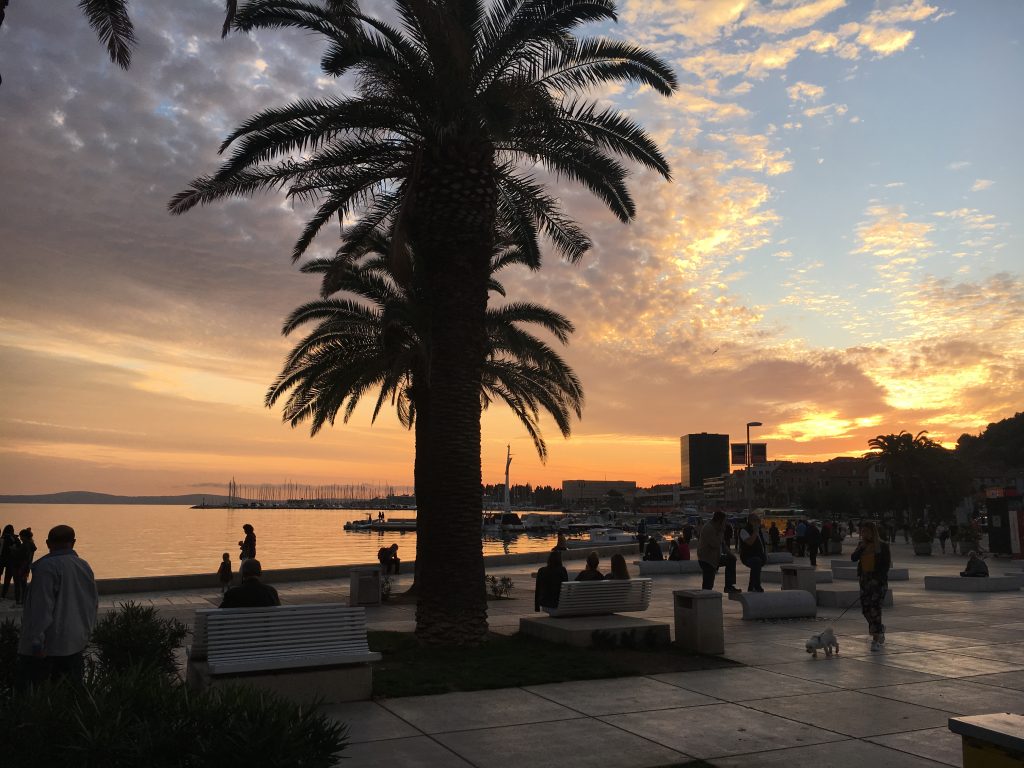 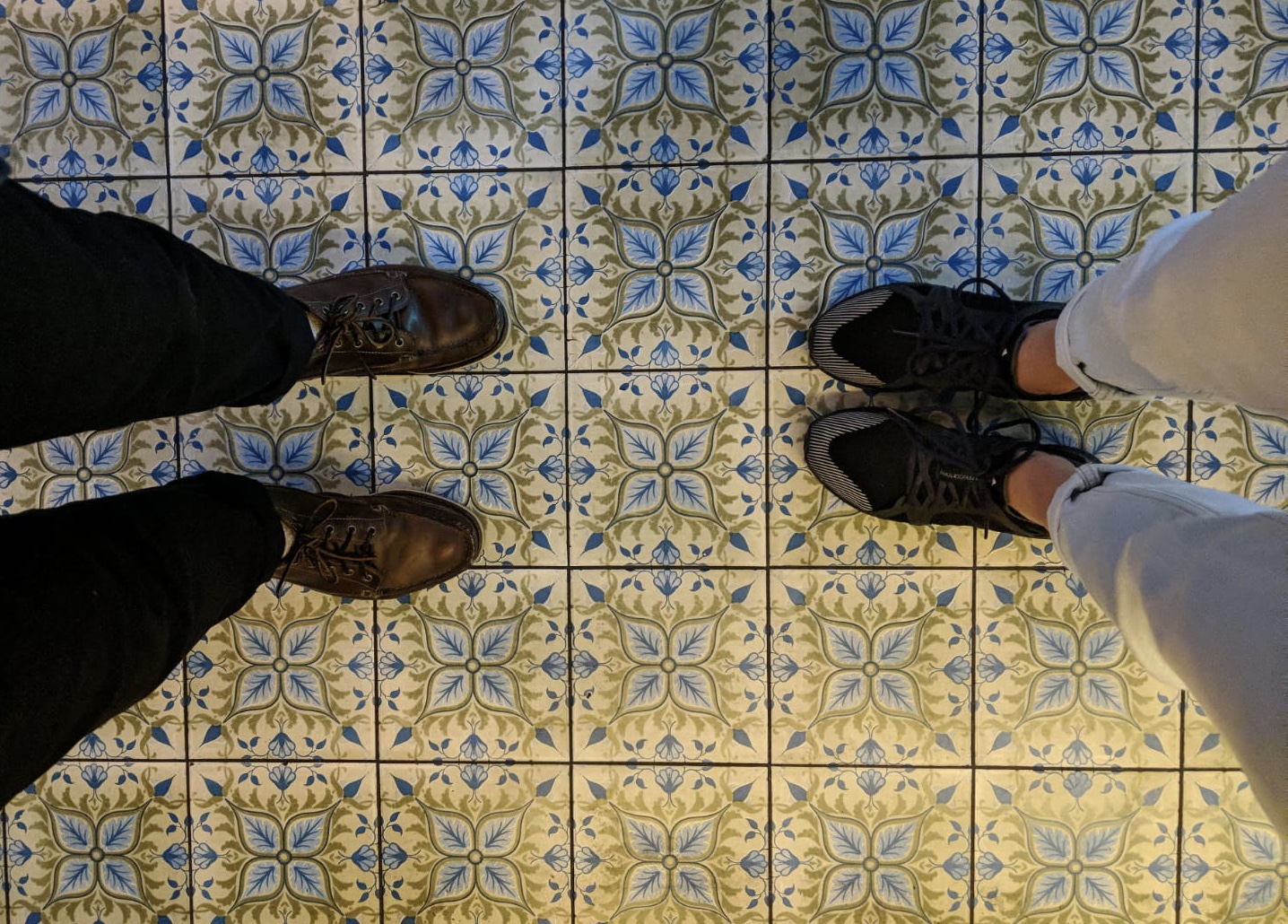 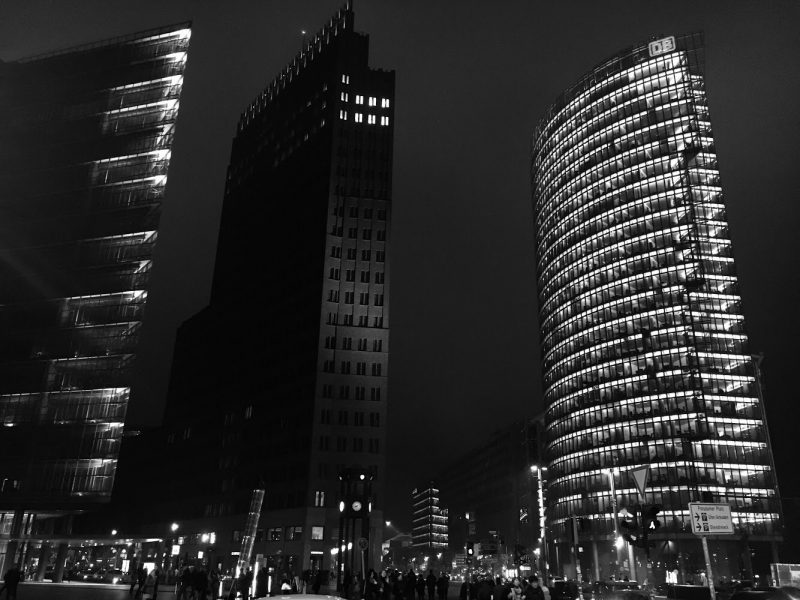 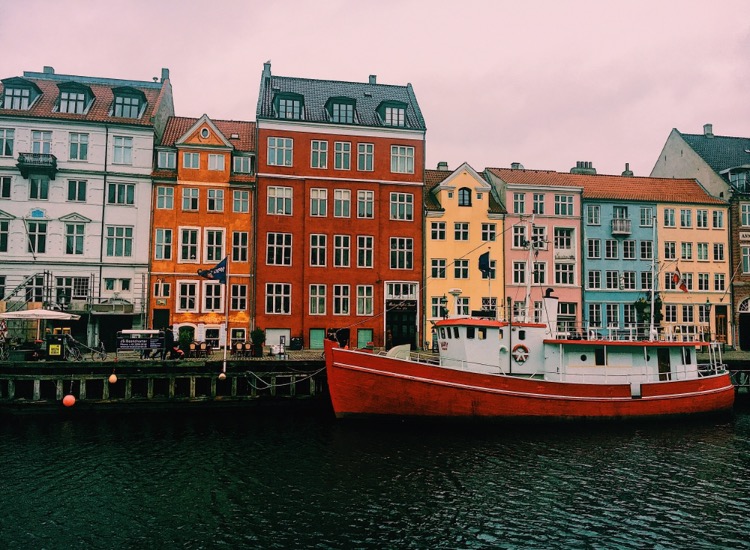