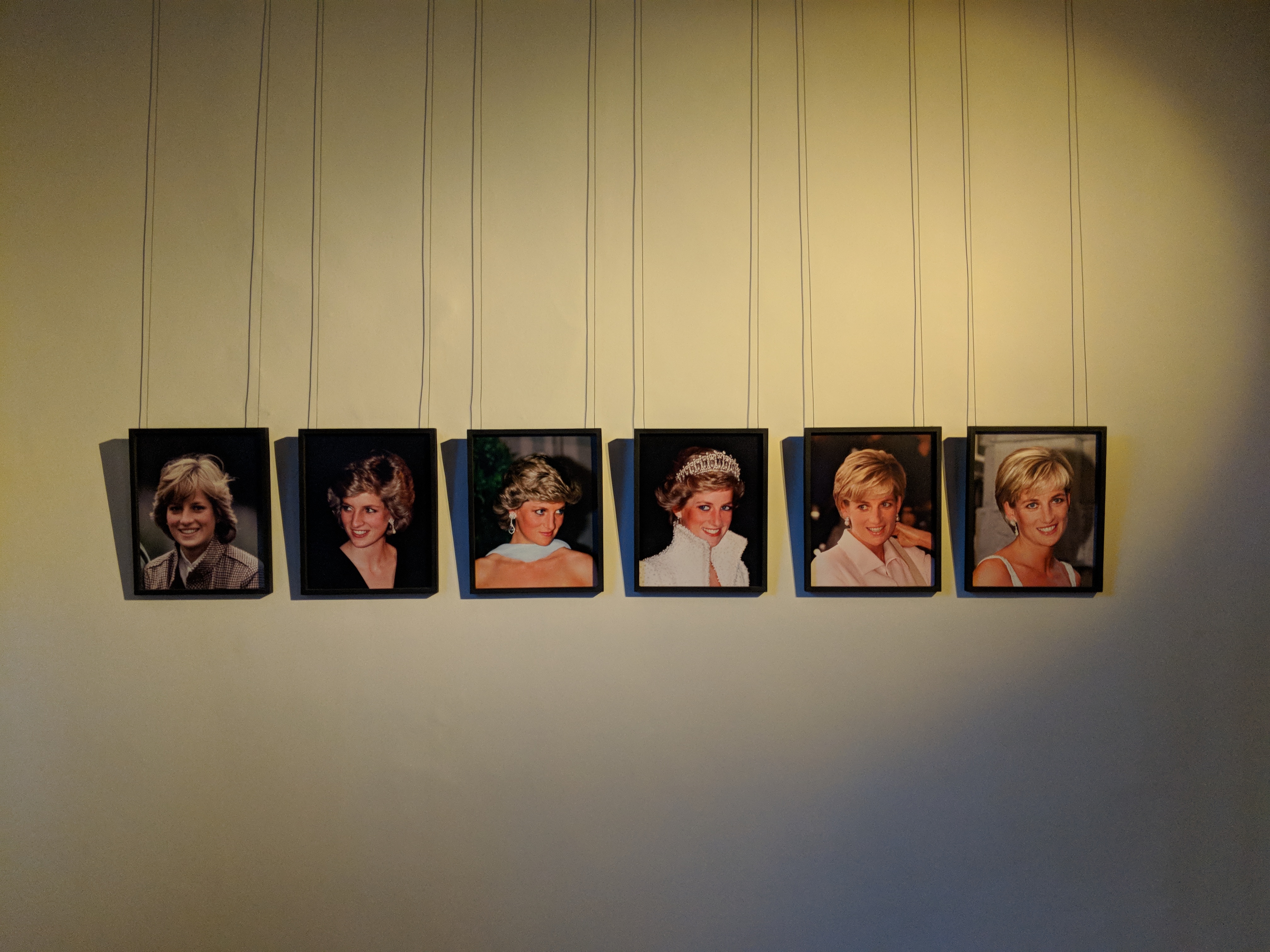 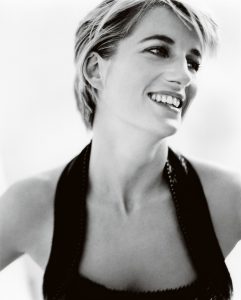 If you believe the posters, the exhibition is a sell out, and why would it not be. We are a nation obsessed with conspiracies and Princess Diana. In a year that has Princess Catherine giving birth to a third child, a son, and  Meghan “luckiest girl in the world” Markle and Prince “Our favourite ginger” Harry announce their engagement, Kensington Palace launched their new exhibition, Diana: Her fashion story. 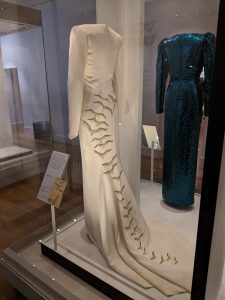 It’s a good exhibition if you’re interested in either clothes or royals, and your ticket price pays for you to have access to the whole palace, which includes an exhibition on Queen Victoria too. If you have an Art Pass – you can skip the queues, and get in for free too!

The exhibition features 25 dresses, each of which tells a story in its own right, capturing Diana’s fashion progress in six themed displays. One thing that did stand out on entering the first room, is of how long ago it all now seems; there’s little here to indicate that we’re in the second half of the 20th century. As was the done thing in the late Seventies, upper class young women still tried to emulate their mothers’ style, and Diana’s 1979 debutante coming-out ballgown definitely exemplifies this. In fact, the first room centres on her clothes in the early years of her marriage and engagement; the shy romantic Diana who loved frills and ruffles. 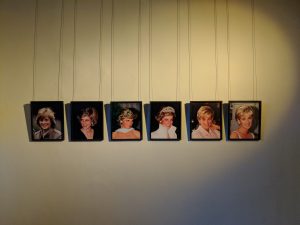 Not really one for fashion, except for admiring how it looks, the names of royal designers were a little lost on me. However, the exhibition highlights include Victor Edelstein’s iconic ink blue velvet gown, which Diana famously wore at the White House when she danced with John Travolta, and the pale pink Emanuel blouse worn for the Princess’s engagement portrait by Lord Snowdon in 1981. 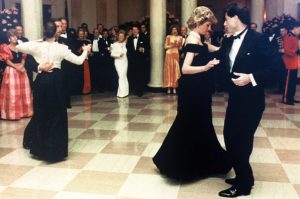 But while Diana, with her fondness for baseball caps and George Michael’s music, might have, on the one hand, been the most modern of royals, her image, as demonstrated here, was founded on the same historical traditions of princely grandeur: traditions which Diana updated and brilliantly, if sometimes unwittingly, manipulated to her own ends. 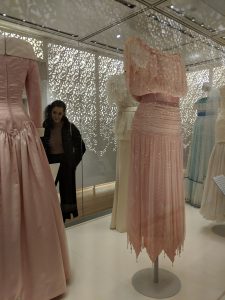 The final room showcases the dresses worn in the photographs from the famous Mario Testino photo shoot, taken after Diana’s divorce from the Prince of Wales. The room has a very different feel to it; much brighter with a central cylindrical case. The soft lighting and subtle dress colours create a serene atmosphere. The dresses in this room show a Diana once again crafting a new identity for herself, away from her past, through the colours and cut of her clothes. The five dresses with their more neutral colour palette, lower cut necklines and sleeveless styles, project the image of a woman embracing a new chapter in her life. 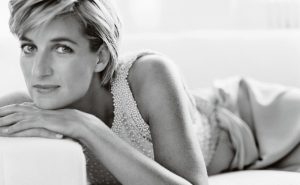 The exhibition is many things: it is a showcase of couture design and modern royal fashion but, more than this, it is the personal story of one woman’s growth and maturity in the public eye from shy girl to confidant, impactful royal. In my view Diana’s clothes are more akin to costume design, for although they reflect the fashions of the time they were designed for her, each one to make some statement about her character, beliefs, presence. Catherine Walker described her clothes for Diana as her ‘royal uniform’ and Jasper Conran described Walker’s relationship with Diana as a designer ‘who would concentrate on her’ – her clothes tell the story of both a unique time in British fashion and the woman who wore them. 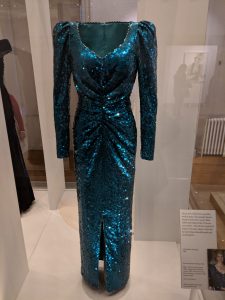 A truly fascinating exhibition offering very personal insight into the late Princess. Well worth a visit! 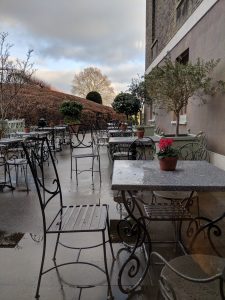 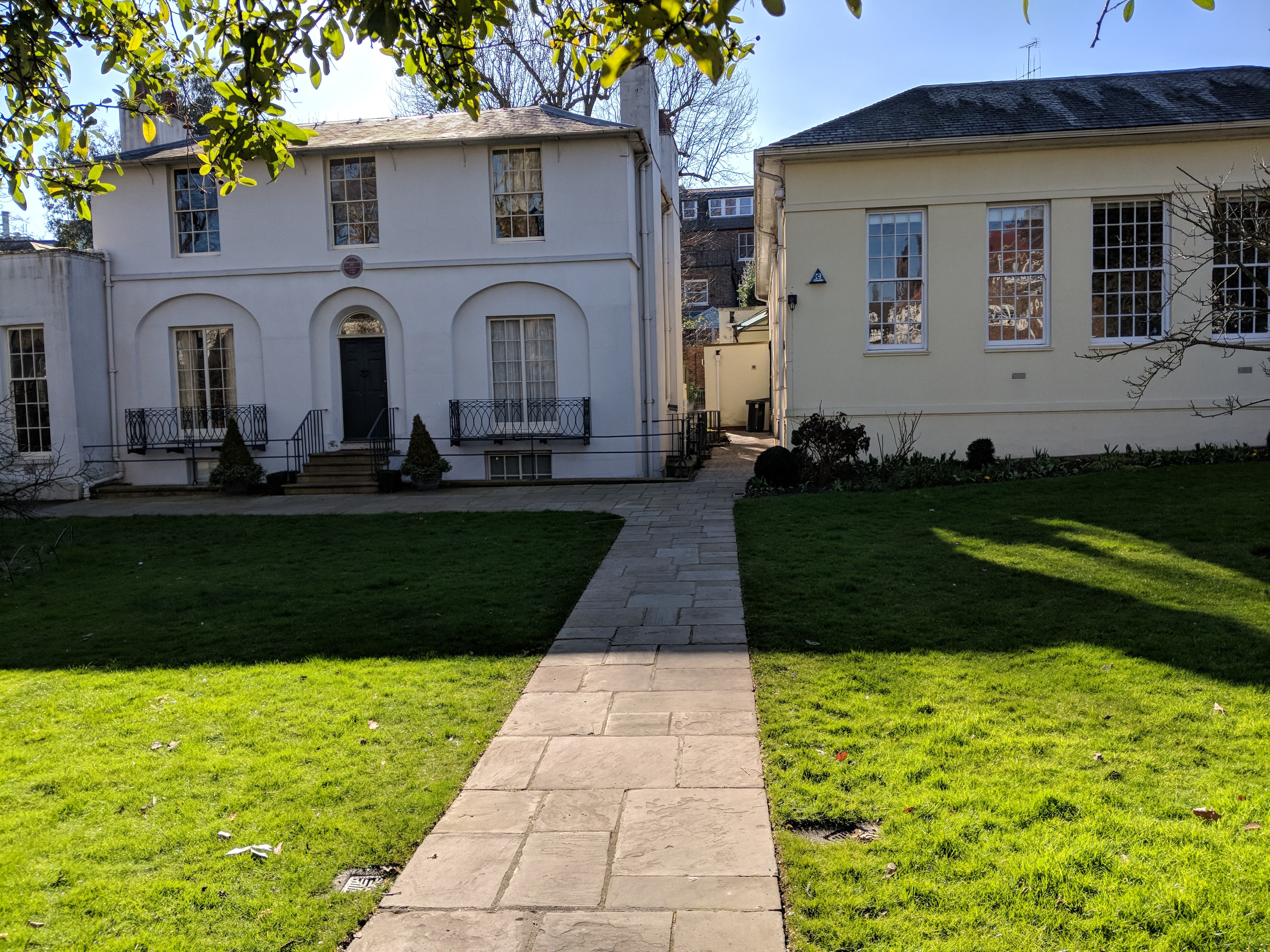 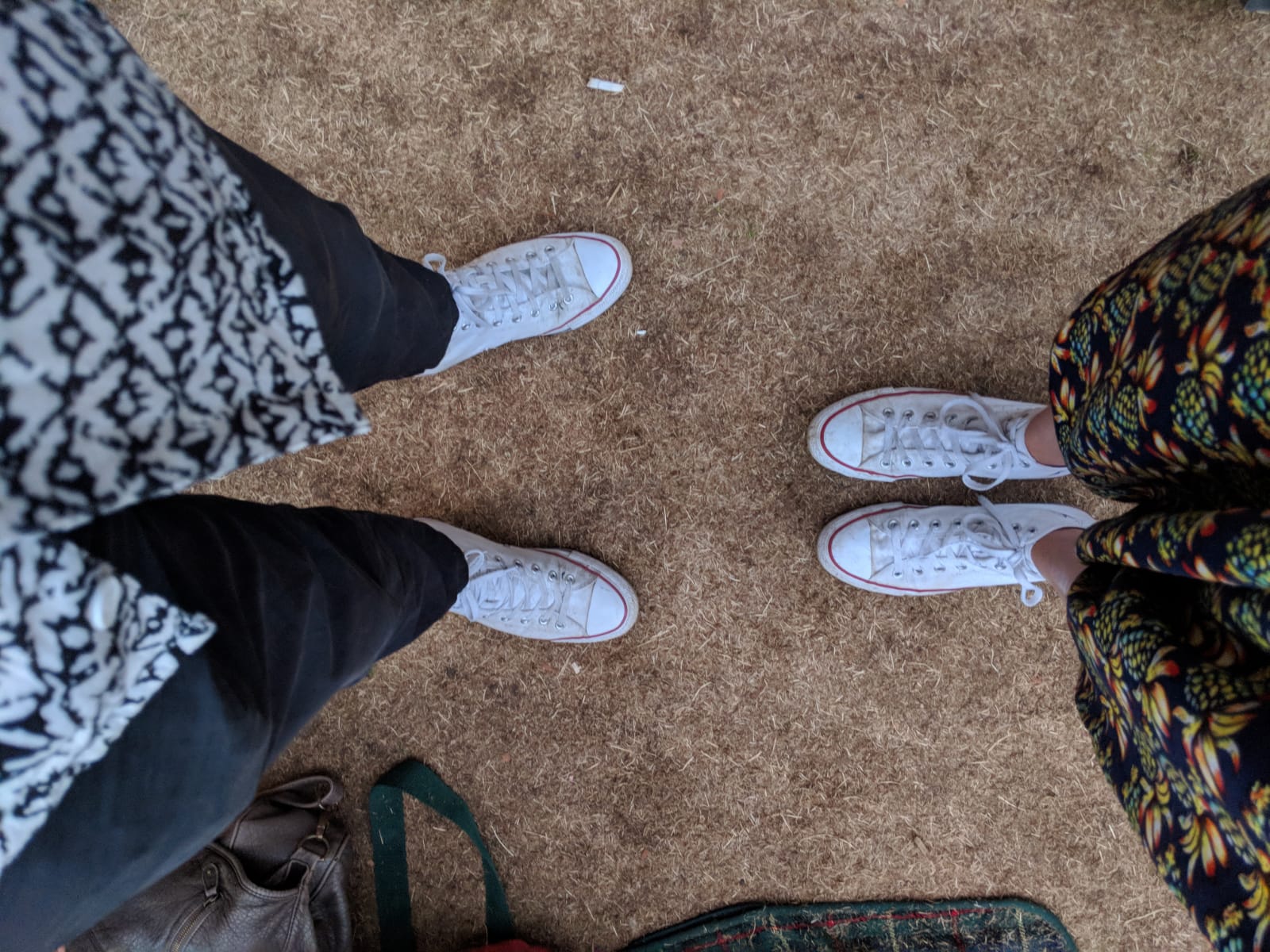 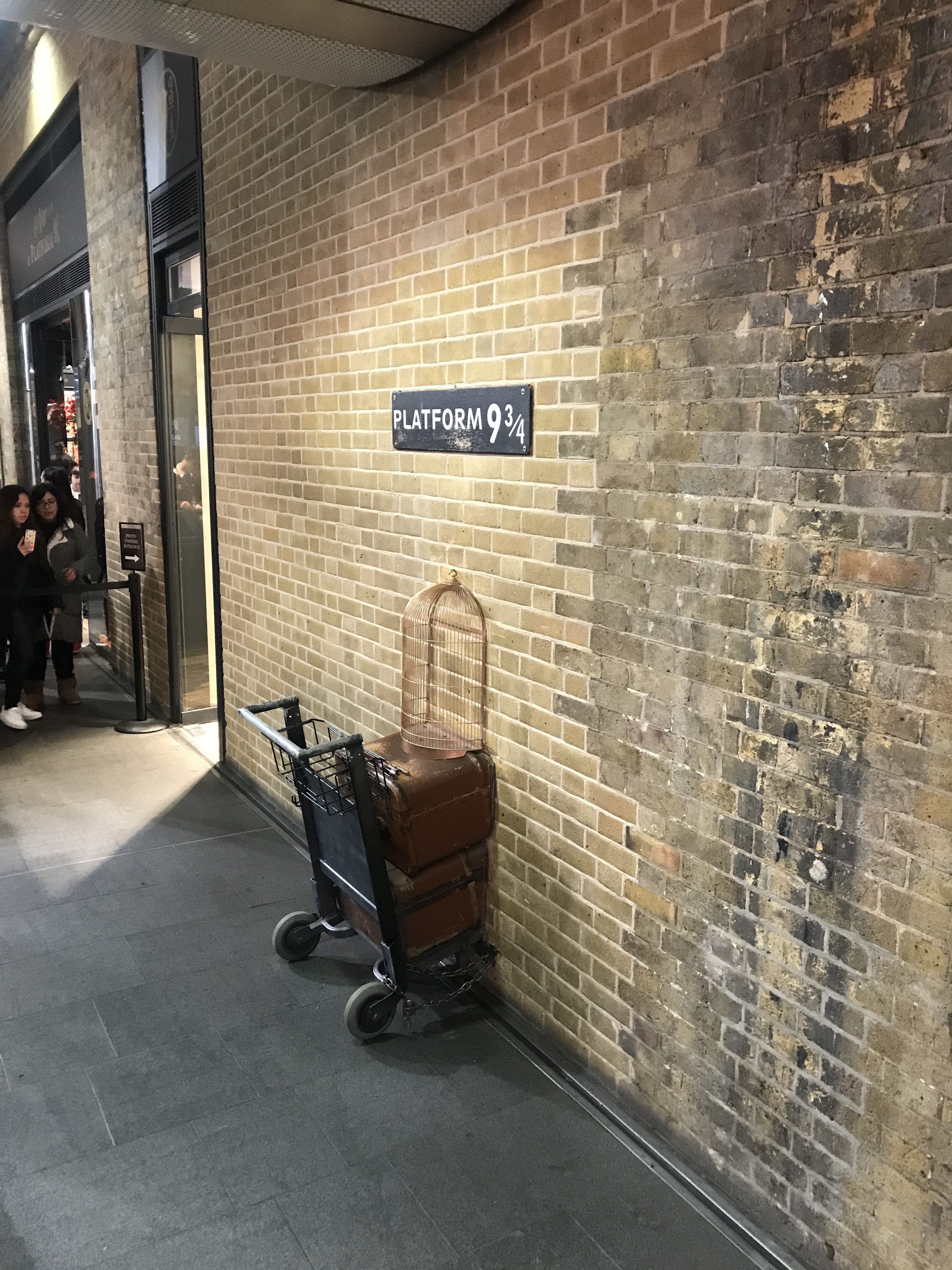 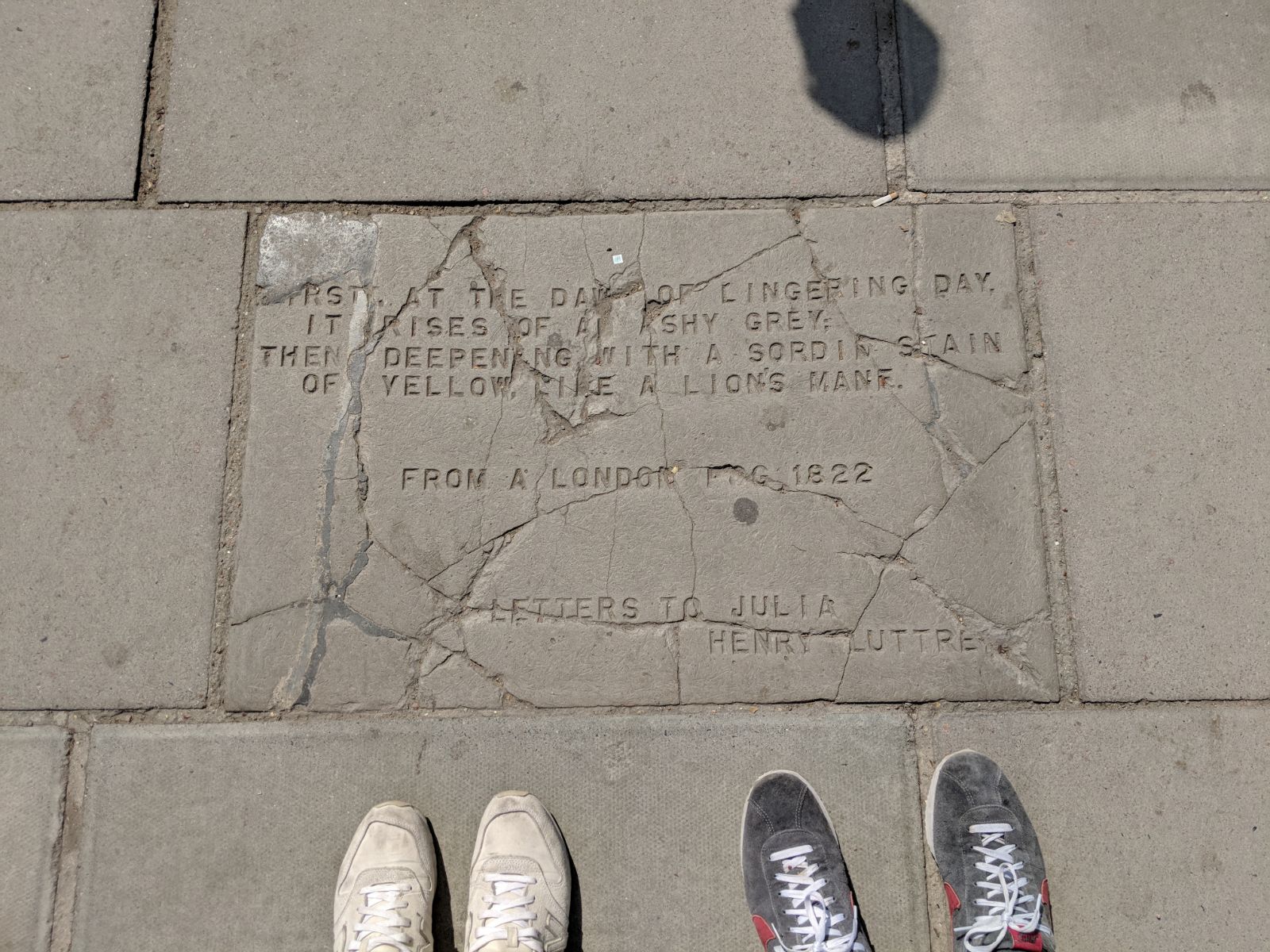 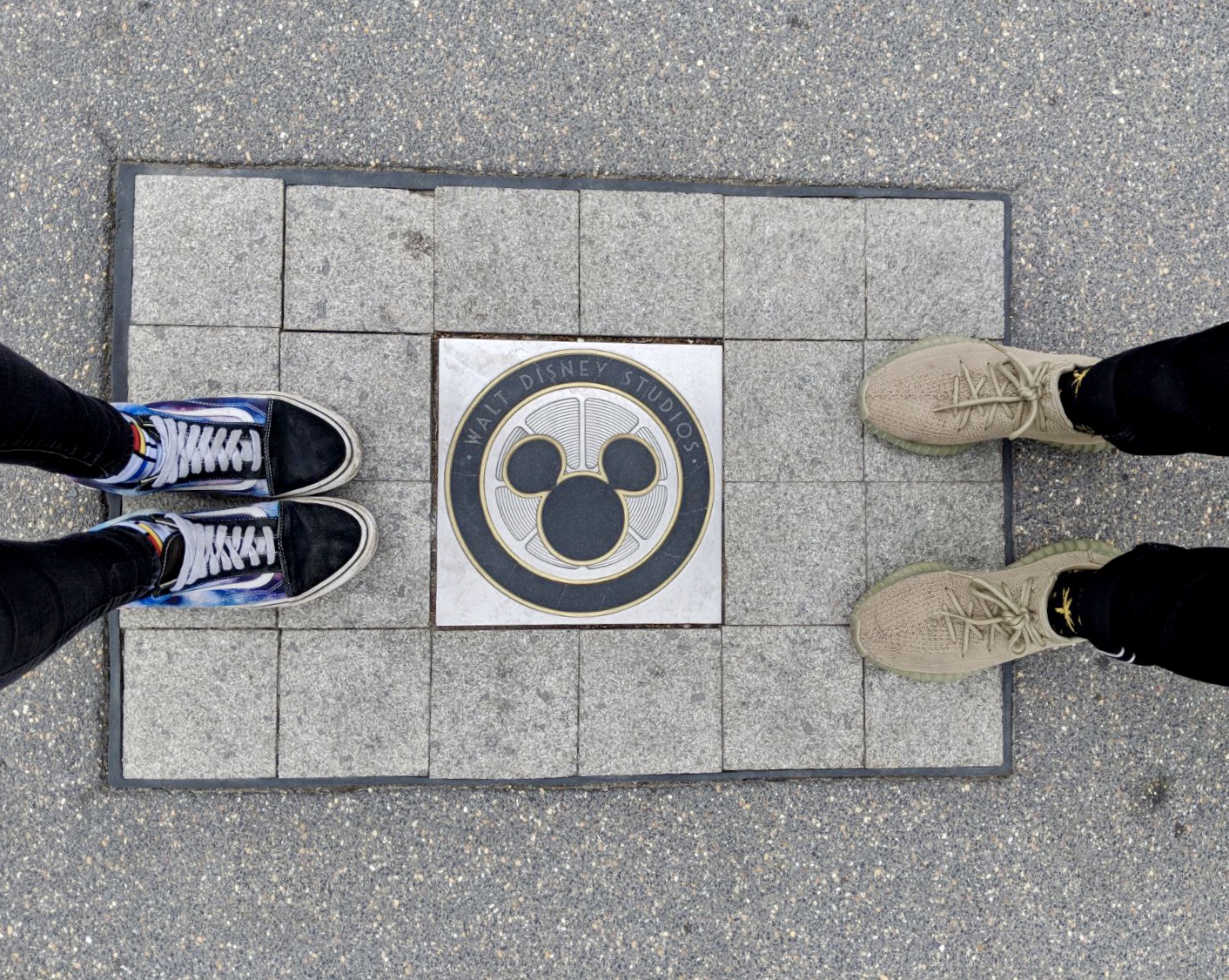